A Day in the Life of a Hijabi: Raabia Khan6 min read

Too often, we see people talking for and about Muslim women. We see viral videos featuring non-Muslims titled “Women Try Wearing Hijab for a Day” or “expert” news guests with backgrounds in the study of ancient Islamic civilization explaining the present Muslim narratives that should be pushed forward by those who live it. The public does not need someone who has no experience living Islam to explain what it is like to be a Muslim in America today—they have American Muslims to do that! We are everywhere…and very willing for you to get to know who we really are and what we are really like.

Lately, hijab has become a token for companies to show they are inclusive, but we are much more than a check mark on a diversity list and have been around way longer than we have been visible in these ads. We are not all the token Google image you see when you type in “hijabi” in the search bar. We are individuals with our own personal stories, goals, and outlooks on life. The thing we do have in common is our hijab and our Islam, but even the way we practice that can differ.

So instead of turning to pundits and journalists telling our stories for us, here at Why-Islam we want to highlight the everyday lives of Muslim women in hijab in particular. This week, we hear from graduate student Raabia Khan from Pennsylvania about her experience.

Can you provide a little background about your school/workplace?

I work at the Children’s Hospital of Philadelphia in clinical research, and I am currently in a Master’s program at Thomas Jefferson University.

When/why did you start wearing hijab?

I started wearing hijab the summer before my freshman year of high school, this month is actually my ten-year hijab-a-versary. Growing up, I always knew hijab was something I wanted to start wearing at some point in my life, but I never felt like it was the right time to start. I understood that it was something Allah wished for me to take on, but I was always apprehensive and nervous. My best friend, who is two years younger than me, started wearing hijab earlier that year, and it gave me the confidence I needed to start as well. It made me realize if someone who is younger than me has the courage to put themselves out there, represent their religion, and visibly show their love for God, then I can too.

What has your general experience with hijab been like?

I am pretty blessed in the fact that my experience with hijab has not been too difficult. Sure in middle school/high school, I got a couple of comments from students and teachers who did not quite understand the point of it. But aside from that, it has been smooth sailing for me, Alhamdulillah (All praises due to God). I know it is not like that for most people, and I want it to be known that hijab is not an easy thing. I know of many people whose families were not okay with them wearing hijab, whose friends started treating them differently, and others who get comments from those they do not even know. Some days it is a huge struggle wearing it and knowing that everyone is staring at you and making judgements, but other days it is the most amazing feeling knowing you are fulfilling something Allah wishes for you.

How has wearing hijab impacted your school/work life?

Back in middle school and high school, hijab was definitely harder to wear because kids were young and did not understand it. It was also a new thing for me, so building my confidence with wearing it was a process I was still going through. As I have gotten older, wearing hijab during undergrad and grad school has been quite easy. I have not had any comments or judgements from anyone, Alhamdulillah. My confidence in hijab has also grown as I have gotten older, so that makes it easier as well. I do not feel as if hijab has impacted my work life in any negative way—if anything, it has made some things easier for me. My first month at work, one of the secretaries offered me a room to pray in because she noticed I was Muslim. I had not even asked her to, she went out of her way on her own, to find me an open room that was not being used. It made me realize that there are many people out there who respect one another’s beliefs and look out for each other. 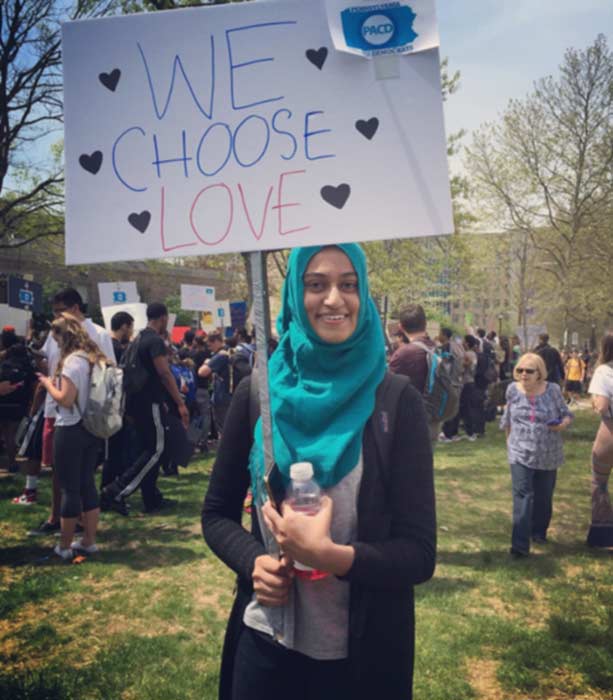 What is your favorite part of being a hijabi?

My favorite part of being a hijabi is that I get to represent my religion wherever I go. When you wear hijab there is no hiding from it, everyone knows you are Muslim. Islam is very misrepresented in today’s media, so it gives me comfort knowing that my actions might help change someone’s perspective on the religion and those who follow it.

What is one thing you would like people to know about the hijab?

I would like people to know that majority of women who wear hijab are not forced to wear it. We are not being oppressed, we are not taking on a burden we cannot bear. Instead, we are wearing it out of our love for God.