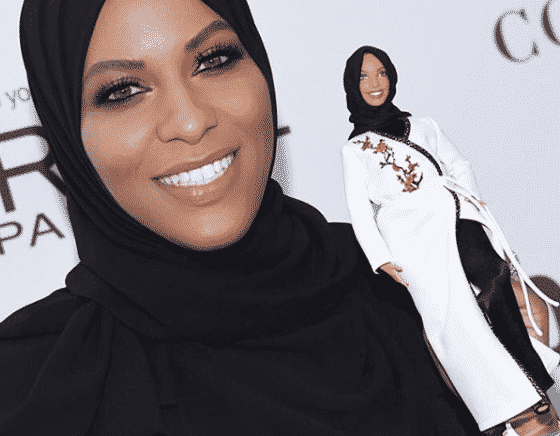 Growing up, I had a lot of Barbies. My cousin and I would get together at one of our houses and claim a room to begin playing out our little fantasy world filled with dolls. As our collection expanded, we formed different families among the toys, grouping similar looking ones together. Realistically, our entire collection could have been one big family—they all looked the same.

I remember some Muslim dolls that were sold when we were younger, but they were nowhere near the quality of the Barbies we had. Their hair was brittle and plastic-like and their heads were easily pulled off. I always preferred to play with my actual Barbies, and not the “Muslim” doll I had that was poorer in its manufacturing.

Recently, Barbie announced the newest member of their Shero line, Olympic fencer Ibtihaj Muhammad. Ibtihaj was the first American to compete in the Olympics while wearing a headscarf, or hijab. She definitely shone a positive light on the Muslim community with all of her accomplishments. Now, Barbie is honoring her with a doll made in her likeness—the world has its first ever hijab-wearing Barbie!

Although I am well past the age of playing with Barbie dolls, I must say, seeing this news really put a smile on my face. I am so happy that young Muslim girls will be able to see a Barbie on the shelf in their toy store who wears hijab. And not only that, but this doll is modeled after an African-American Muslim woman fencer who competed in the Olympics, is an incredible voice for justice, and represents her religion without any shame despite living in a world that spews anti-Muslim bigotry left and right. She is a role model for everyone, everywhere—not only young Muslim girls.

I remember hearing Ibtihaj Muhammad speak once at my university. She shared her story about how she got started with fencing. Her parents noticed the uniform in fencing covers the entire body from head to toe. A Muslim woman who wears hijab also covers her body head to toe. It was a perfect coincidence. And thus, began Ibtihaj’s fencing journey.

In an interview about the launch of the new Barbie, Ibtihaj mentioned she requested her doll embody more built, athletic legs as opposed to the very thin one’s people are used to seeing on the famous toy. This is yet another stride Barbie has made as a company to reflect different types of beauty. Last year, they expanded their toys to include dolls that were shorter or taller than the average Barbie. In this, we see how Barbie is using its product to teach young girls that every type of woman is beautiful no matter her shape. With its Shero line specifically, we see the achievements of the women it celebrates to be the point of conversation, not only how physically beautiful each of the honorees are.

Interestingly enough, this concept is rooted in Islam as well. Women are not to be seen for only their physique. The religion requires women and men to cover the most outwardly attractive parts of themselves, and thus causes others to see individuals for their intelligence and actions, not merely their looks. This results in valuing people for their amazing accomplishments.

Today, Ibtihaj Muhammad and many others continue this Muslim tradition of female excellence. Their adherence to their faith did not stop them from reaching their goals, despite the wrongful predictions of their doubters. Instead, Islam lifted them up, instilling in them a value for themselves and others as well as a drive to be the best they can be. It is wonderful to see Barbie celebrating the achievements of women today, and it is even more satisfying to know Islam has been honoring women since its very beginning.