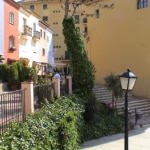 When we study European history, it generally traces the roots of Western civilization to the Greeks and Romans, followed by a dark period called the Middle Ages in which Europe languished in gloom. We are told that this bleak era eventually gave way to the Renaissance after Europeans rediscovered their classical Greek and Roman scholarship. This movement became the precursor to the modern world as we know it today: progressive, technological, scientific – perpetuating the widely-held notion that almost all great inventions have had their origins in the Western world.

Yet, this narrative of history doesn’t answer many crucial questions: Was all of Europe covered with a dark cloud during the Middle Ages? How was the rest of the world faring at the same time – did any inventions take place in any other part of the world or Europe? How did the Europeans rediscover their classical roots? How did this regained scholarship enable Europe to emerge out of darkness and achieve all the greatness that it has?

This is where another – seemingly disconnected – history steps in. It is an account that neatly fills in all the missing gaps and crevices in the history of Europe as it is taught – yet, sadly, this record is usually expunged from history books.

The Seeds of Renaissance

Video: 1001 Inventions and the Library of Secrets