Kairouan: A Center of Learning, Arts, and Sciences 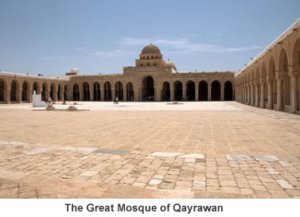 The change of government in Tunisia recently took everyone by surprise. All eyes turned to the capital, Tunis, when Ben Ali relinquished his power and fled the country, causing a ripple effect in the region. Here, we would like to highlight another city in Tunisia – Kairouan – which has an illustrious history and is recognized today as a UNESCO World Heritage site.

Founded around 670 A.D. by Uqba ibn Nafi when he camped there during his military expeditions in Western Africa, Kairouan (Qayrawan) grew to become a vital center of learning, arts, and sciences. Famous for its wealth and prosperity, it was equally renowned for its commitment to Islamic and Quranic learning. [Click here to find out about Islam in Europe.]

The Aghlabids constructed the Great Mosque and established a university in it which catered to both Islamic scholarship and the secular sciences. They also built palaces, libraries, gardens and waterworks which enthralled visitors. Subsequent rulers, such as the Zirids, continued its glorified stature through their devotion to the sciences and arts.

Scholars were attracted to its schools and universities. Merchants came for trade and farm produce, which were cultivated through elaborate irrigation schemes. Kairouan was also an intellectual hub for the Jews, and many important Jewish figures, such as Rabbeinu Chananel, R. Nissim Ben Jacob and Rabbi Isaac Alfasi, hailed from or studied there.

According to 1001 Inventions: Muslim Heritage in Our World, the Great Mosque of Kairouan also lodged a hospital: “The 9th century al-Qayrawan hospital was a state-of-the-art institute, with well organized halls including waiting rooms for visitors, female nurses from Sudan, a mosque for patients to pray and study, regular physicians, and … a group of imams that practiced medicine and whose medical services including bloodletting, bone setting and cauterization. It also had a special ward for lepers … at a time when elsewhere leprosy was deemed an untreatable sign of evil.” [Read more about how Muslim scholars showed that disease was not a punishment from God.]

Alongside, its medical scholars wrote encyclopedic medical books which were translated into Latin and made available for a European readership through people like Constantine the African.

In the 11th century, Kairouan was sacked by rival factions and thus spiraled towards its decline. The Great Mosque of Kairouan (also known as Mosque of Uqba), the Mosque of the Three Gates, the Mosque of Ansar, and two Aghlabid water reservoirs remain from its glorious past.